Emily is a native of Kingston who dominated local high school running in the late 1990’s. During that time she ran on the Canadian Junior team and won medals at Ontario School Championships in Cross-Country and Track for the Frontenac Falcons. She went off to Providence College, Rhode Island on a full athletic scholarship to compete at the Division One level in the NCAA. Emily struggled through injury for 4 years to some good performances in difficult circumstances for the Friars. She recently returned to Kingston after completing teacher’s college in 2005 at Western University in London, Ontario. 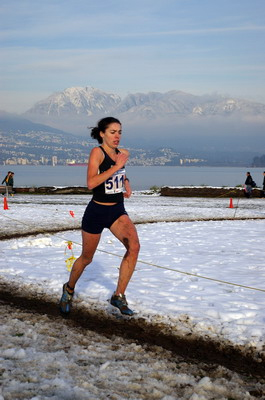 Her two years back in Kingston have seen much progress and development as she combines the early stages of a career in teaching with a new approach to training and racing with the Physi-Kult club under the guidance of Steve Boyd.

It has been almost two years since we saw her return to the KRRA scene with a second place finish in the 2005 Limestone City Half-Marathon. Since then she has been all over the Canadian road racing, track and cross country circuit, making a name for herself as an athlete with excellent championship results.

Here, Emily tells us some of the story of how she got into running and describes her journey back from injury and despair to new heights of athletic success including two big “6ths in 2006”; 6th place in the 5K on the track in Ottawa at Canadian Track Championships and her 6th place finish at the Canadian Cross-Country Championships in Vancouver’s Jericho Beach Park (shown in the picture).

Her plans for this season focus around racing well in the 5000 metres on the track on July 17 in Windsor at the 2007 Canadian Track and Field Championships.

What did you do today (or yesterday) for training?
Finished my second long run of the week; 80 minutes followed by weights and core exercises.

How did you get into the sport of running races ?
My sisters and I created a makeshift track around our home and we would race each other. I also remember being terrified to race at Richardson Stadium; shortly before the 800m I refused to run. My older sister (Liza) told me if I finished she’d buy me a Mr. Big bar from the canteen and from then on I was hooked. 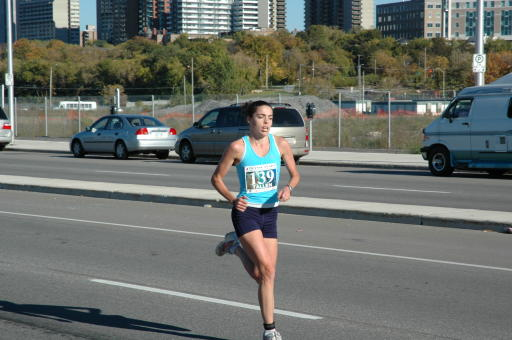 How did last year’s Limestone 5K go for you ?
Last year’s Limestone race was the first race of the season for me so it was a bit slower as I trained through it without tapering. I find it usually takes one or two races for me to get into the groove of things again.

How did your last competitive season end up ?
I competed in a few fall road races and two Cross Country races. OTFA’s in Brockville where I finished 3rd and the Canadian Cross Country Championships where I finished 6th. I found the course for nationals very challenging as there was quite a bit of slush and mud to run through.

What are your plans and goals for the next one ?
My goal is to run 5K in sub-16:30 on the roads and sub-16:00 on the track. I’ll be focusing on the Canadian Track and Field Championships where I’ll run the 5km.

What factors do you take into account when planning a race or series of races ?
If it’s on the road, I usually look for a race that’s flat and accurate. I think it’s important to pick one race per season to focus on and every other race should be a build up to that race.

Who are some of the important supportive groups and people in your running life ?
Without a doubt, my coach Steve Boyd, my family and boyfriend Thomas Murphy. I truly feel blessed to have a coach like Steve and an incredibly motivating and supportive training group to run with too!

After finishing up 4 years of running in NCAA for Providence College, I threw my spikes in the trash bin and called it quits. I just figured I wasn’t meant to run as I had 4 stress fractures, difficulty controlling my asthma and plantar fasciitis - all in the span of 4 years. I started helping out with the LCVI XC team where I met my current training partner, Pat McDermott. He encouraged me to talk to Steve Boyd, who coaches a group of runners under the name of Physi-Kult. A few years later, two to be exact, I decided I would run. Steve is an incredibly talented, intelligent and positive person. After a year of running under his program I was able to knock a full minute off of my 5km road time and 40 seconds off my 5km track PB.

Pat Mcdermott is also a huge help to me. He’s a very talented and experienced master’s runner who knows a lot about the sport. He keeps me on my toes in workouts and gets me out the door on those days when I don’t feel like running.

Thanks to Emily for taking the time to answer a few questions and post some action photographs. Look for news of her results here as she travels through the spring season towards Canadian Championships in July.